I have had the opportunity over the past couple of days to squeeze in some play on Star Wars: The Old Republic. There’s a lot I have to say about this game, some good some bad. For the most part it is good. It is very story-

oriented, which is what you expect from Bioware. As a writer I kind of like that part. Go figure.

I am still a little uncertain about the replayability of the game. World of Warcraft has more of a sandbox theme (it’s not really a sandbox by Eve Online definition, but those elements are there) than the linearity of SW:TOR but there are many little things about the new Star Wars game that I am finding enjoyable.

I will post a more exhaustive review later once I get deeper into the game, but so far I can say I am finding it enjoyable. I have been looking for a new MMO and I may have found one. I am only ever a casual player anyway, and this game seems to fit that general need.

As I was blogging about earlier I rolled a Jedi Consular and chose the advanced class of Sage. She’s sort of like a warlock from WOW, a mid- to long-range DPS class I enjoy playing. As I was making her she sort of came out to have the old Yvonne Craig look from a Star Trek episode, haha. Anyway, she’s pretty cute. Her name is Gaella: 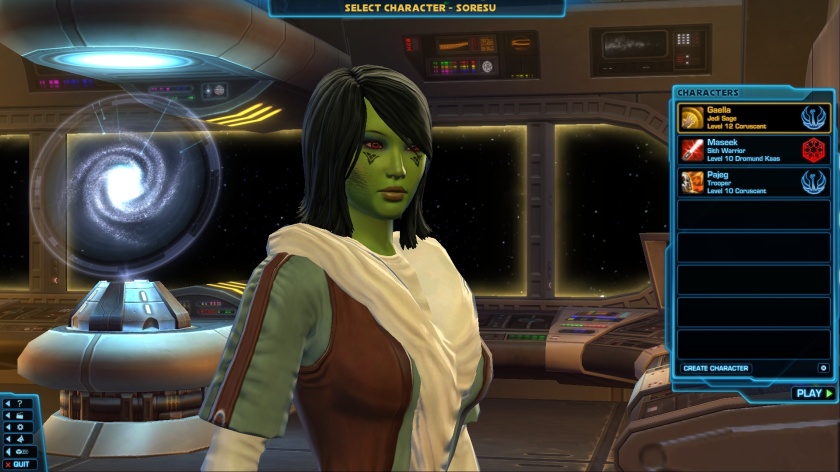