Forget everything you know, or think you know, about Matt Dillon and Kitty and Doc.  This radio series which ran for nine years was meant to be an adult-oriented western that broke the mold and challenged the archetypal Western hero.  The creators, Norman MacDonnell and John Meston wanted to shatter all Western stereotypes.  They were successful.

The result was Gunsmoke.

The first audition was a hardboiled detective story set in the West. The main character was “Mark Dillon.”  The second audition was more Western-oriented but then the project sat on the shelf and gathered dust for two years.  Eventually, a radio actor named William Conrad read for the part and was immediately hired as the show moved into production.

Everybody has an idea of the type of man Matt Dillon is. Whether it be from the television show or national iconic status, everybody knows what kind of man he is and what he believes in and how he deals with people.  Forget all that. In the radio program, Matt Dillon is damn near a psychopath.  He’s as hard and brutal as the violent men who pass through Dodge City from the cow trails.  He’s acerbic and bitter and when his gun hand moves, it moves in a blur.

The writing portrays this all the time. In one episode a man comes up to Dillon out of the dark.  “Some night I’ll get drunk enough to pull on you you, Dillon.”

Long pause, and delivered with conviction:  “Then that’s the night you’re gonna die.”

“I’ve seen you in action. You’re not fast enough.”

And Dillon is always shouting at the rubbernecking crowds, telling them to shut up or he’ll club them to death, or threatening them he will NOT tolerate a disturbance, or asking with clenched teeth when they don’t disperse fast enough, “Who wants to die first?” 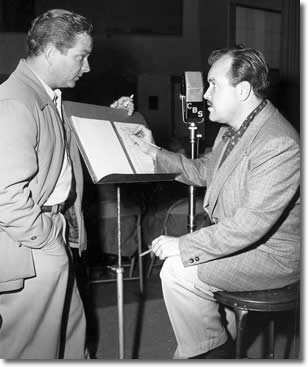 Yeah, he’s a psychopath barely holding himself together, nerves made of barbed wire and a soul of scarred leather.  The radio series establishes this at the beginning.  Dillon is a violent man who has moved West with violence.  He is hard and brutal; life, and his job, made him that way.  He is completely different from anything you have seen on the television program.

And Kitty Russell?  It was never implied on the television series she was a prostitute.  But if you knew anything about the Old West you knew what she did for a living.  The radio show is very different from TV.  Kitty’s not a prostitute on the Old Time Radio series.  She’s a whore. I find this incredible.  You’re talking about 1952 and it’s cut and dried: Kitty sells herself to other men and Dillon is in love with her. And if you say something bad about her, well, you’d better start digging your grave.  Fascinating with what they got away with on radio, but couldn’t even touch, or allude to, on television.

Doc Adams?  He’s a gibbering ghoul who rubs his hands over a corpse because he’s going to be paid an autopsy fee. He was played by Howard McNear, the same actor who played Floyd the Barber on The Andy Griffith Show.  His soft spoken voice and gleeful nature as he pokes and prods at a cadaver is very disturbing.

Sound effects, as you might guess, are essential in radio.  Gunsmoke was famous for layering sound to create the emptiness of the prairie, the dust-filled streets of Dodge, the cold wind blowing through the stunted trees, the sound of the night train coming into Dodge.  When you hear a gunshot on the radio program that’s an authentic weapon: carbine, six gun, scatter gun, being fired.  It’s all authentic, even the animal life was meticulously researched.

As the show progresses it begins to concentrate on the human relationships between the principal characters with violence and adult sex as an undercurrent theme.  But as good as it is, the acting, the emotive voices, the incredible sound effects, the stark characterization…nothing beats the writing itself.

John Meston wrote about 25% of the episodes. He accurately portrays the harsh brutality of what life was like in an unforgettably harsh and graphic manner.  Dillon doesn’t always win in the end. In one episode he amputates the leg of a man to save him from blood poisoning.  The man dies anyway. In another, a girl is raped for weeks by four men.  Dillon rescues her, but she becomes a prostitute.  Sometimes the bad guy gets away completely.  In one story, an entire family is slaughtered and the wife kicked to death.  Dillon finds her daughter in a copse of dark trees, raped and killed and scalped. Chester stands over the body and weeps.

As a writer I like to think I know something about writing. But I’ve learned more by listening to these programs than in all the years I’ve been writing professionally.  Maybe that says something about me, but I think it speaks more to the power of these stories and what they ultimately reveal about human nature and all its brutality.

If you want to learn how to write, if you are a writer and want to learn more about theory and characterization and stark dialog, I strongly urge you to give some of these episodes a listen.  You won’t be disappointed.

One final note. Those who know about the creative process of my own western series, Haxan, know how much of an influence Gunsmoke had on me. I can’t think of a better inspiration throughout the entire genre than John Meston’s creation.

8 Replies to “Gunsmoke: “I will not tolerate a disturbance. You know me.””