I don’t think I have many stories rejected anymore because of the writing per se. (Although I am capable of  writing the occasional sentence that makes the reader stop and say, “Wha?”)  No, I think the reasons I get rejected now is due to length: too short o 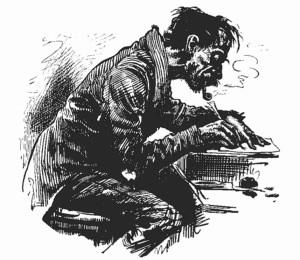 r too long, the editor having a bad day, the editor having my story and another equally good from a well-known writer and picks the other guy (well, I would too, writing is a business) and a hundred other little things out of my control.

In a way it is like trying to catch lightning in a bottle.  It’s not my skill level as much as it’s timing, space left over in a magazine, and a host of other little problems I cannot remove.  That’s okay. I can actually work with that.

Meanwhile, I do what I can to keep those road bumps down to a minimum.  I feel rather good overall about my ability to write.

If writing is all I want to do. But even when you accomplish that, there is one more barrier you have to overcome.

You see, I know a lot of writers.   All the successful writers I know have one thing in common.

They all have the courage to fail.

They know to attain success you must 1.) submit your work 2.) believe in your work (and yourself) and 3.) possess enough courage to be willing to fail, and fail repeatedly, until you are published.

I also know a lot of people who want to be writers.  Some of them are pretty damn good. The only thing holding them back, as far as I can tell, is finding that inner courage and preparation to confront failure. .

It’s a difficult concept to accept.  I’m not saying it’s an easy philosophy to live by.  But if you want to be successful in anything you do, you must have the courage to try and never quit until you reach your goal.  This lack of courage is, I believe,  one reason I see so many  otherwise decent writers give up before they’ve ever truly begun.

Writing is not easy. I have no patience for anyone who thinks this profession is easy.  In fact it can be downright soul-smashing.   But remember when you get rejected it’s not personal.  It’s never personal.  The editors aren’t rejecting you, they’re rejecting your work, and no, even if you want to believe otherwise, they are not the same thing.

So find the courage inside yourself  and start submitting. I think you will be pleasantly surprised at the results. 🙂

4 Replies to “On Rejection and Courage in Writing”